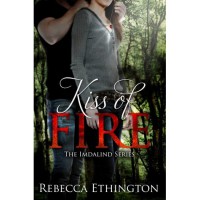 DNF at 75 %. This review contains spoilers.

Ever ate too much candy? Ya know, when you eat so much you get sick from it but can't make yourself stop from eating more? Yea, this book = that.

Interesting paranormal concept. Somewhat original and I applaud the author for that. Sadly, not strong enough to make me wanna stick around.

The 'heroine' is beyond annoying - whiny, weak, immature, pathetic, TSTL. I don't need my heroines to be kickass right away, they can grow into that role, but there is only so much lack of strength I can take. Who the fuck wants to read about a girl that hides in a corner when she's about to die? Honestly, I get that some go defensive instead of offensive, but there's still a difference between fish in a barrel and a cornered tiger. FYI, giving heroines superpowers just because they lack even the smallest survival instinct, is ridiculous.
Not only is she TSTL, but also TSTD, because then I wouldn't have to read on and on and on about her never ending helplessness and pain and blablablablabla.

The plot is draaaaaawwwwwn out. The first 1/3 of the book creeps along and nothing interesting ever happens.
I can't even be bothered to list all the things that made me wanna headbang the wall over and over again.

Further treats:
- Her best friend Ryland gifts her with presents worth several thousand dollars, because you know he can. She has NO problem taking them. Not one thought is wasted.
- She FIGURES OUT NOTHING by herself. She gets hid over the head with a gazillion clues. But instead of using a few braincells on finding out what the fuck is going in she's more like: 'Nah, why leave the easy road of complete and utter ignorance and stupidity.'
- Again, she questions NOTHING. Hint: Jumping on Rylands back scene. TSTL.
- Ryland is super uber overprotective; starts carrying her around when she has a small scratch. AND SHE LET'S HIM.
- She meets Ilyan. Thinks he's somewhat hot but knows he's about 10 years older than her and she thinks that's gross. Then she gets to know he's centuries older. Book 2 (blurb): He becomes her love interest. Duh.
- Love triangle. Nough said.

YA doesn't mean maturity is a taboo topic. But this book almost feels like it.
Teens might like this book. I might have a few years back. But I am adult enough now not to squeal over somewhat not unattractive males and/or anything potentially romantic. 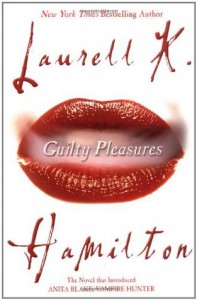 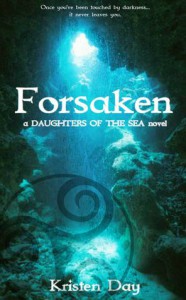 2 Stars for the concept. 0 Stars for it's execution. Recommended only to die hard twilight fans: If you thought Bella was too active, Edward wasn't creepy enough and the plot was downright too action packed, then look no further: you'll be eating this book right up.
Tweet 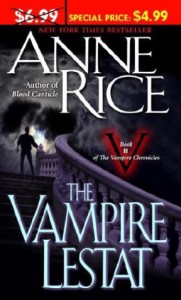 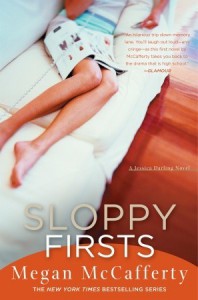 I desperate want to review this book. I write my thoughts down in my head, yet when I want to type them out, I cannot help but end up empty handed. Hence, I will state it simply, with few words - yet the only ones that matter: I loved this book.
Tweet 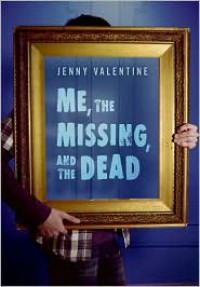 I have a feeling this book will break my heart a little!
Tweet 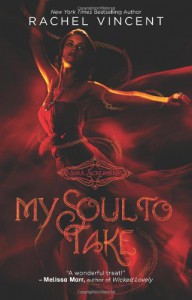 If you get annoyed at shallow characters, obvious plot lines and a rather unexciting love story, then I'd suggest you skip this book. I absolute LOATHED this book. So many of my friends rated this book quite highly, which compelled me into wanting to like this, too. Yeah, well, that didn't work out. I stuck out until the end, in hope I would find SOME redeeming qualities. There were none.The Characters The characters are one-dimensional. They have names, alright, but that's about it. They have absolutely no personality, and they don't develop one throughout the story either. As an added bonus, they are beyond stupid, which makes you wonder if they are physically incapable of understanding the world around them. There isn't one character that acts and feels like you and me - like real people - would. They weren't even trying. Examples: a) Father abandons Kaylee because he's too egoistic to deal with his grief (the reaper argument was beyond ridiculous), and rather makes her feel unloved for the sacred of normalcy (children CAN deal with life complications, they CAN'T deal with losing those they love), which she didn't get ANYWAY. Not that the father sees to correct this in time. b) Relatives of Kaylee actively make her believe she's crazy AND make her feel rejected - INSTEAD of being loving people that take matters in they own hands and carefully step by step explain things to her.c) Raylee and Nash sacrifice another girls life to save Raylee's best friend. And yes, they didn't KILL the girl, but they KNEW it would happen. Afterwards they don't even have the decency to feel bad about their actions. But hey, it was another cheerleader, those are alright to sacrifice. I could go on, but I really don't want to.Just like the deal with Faythe in the Shifter series, everything is okay, everything is allowed, everything is reasonable JUST because it's the main characters we are dealing with. The PlotThe plot is just as shallow. Honestly, it PRESENTED itself to me. I wasn't even trying to figure out what was going on. The whole thing was just beyond obvious that you had to be blind not to see what was coming. Mind you, blind were the characters. Examples of main points:- Not only was it obvious Emma would die and be brought back by Kaylee, it was also really uncreative. - Kaylee's mother gave her life to save Kaylee's. Really, reaper+reaper's girl story+"borrowed time" clues you right in. - The aunt was related to the incidents. Her behavior was SO - again - OBVIOUSLY suspicious. Mind you, I didn't predict her death but that's also about it. I am not going to go into the climax. All you need to know is that everyone comes to save the day, it's happy ever after and it's completely anti-climatic.The World BuildingThe world building is extremely weak. I am all for bean sidhes, reapers and netherworld creatures but there were so many - to me - logical flaws in the whole construct that I actively had to stop myself from banging my head against something.There are several books that have the whole soul-system down to a better science (and yes I realize this is fantasy, but mind you, even there exists logic). All in all, a frustrating read for me. I believe, however, that others are to disagree with me, and am happy when they can enjoy this.
Tweet 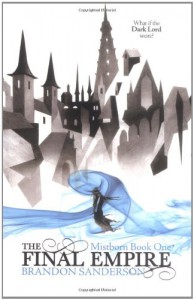 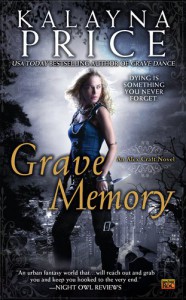 I HATE THIS BOOK. I HATE IT. HATE IT. HATE IT.Yesterday, I was a stupid girl. Unexpectedly, I had to babysit. In the middle of my Darkfever reread. Annoyed I got up, and went to sit small monsters. Dumb as I am, I forgot my book at home. It will be fine, the voices in my head said, you can buy Grave Memory on your phone and read it instead. Yea. I should now better than to listen to myself. (Spoilers. Ahead.)BOTH Death and Falin declare their undying love to Alexis.She doesn't proclaim any deep feelings to either.Death and Alexis FINALLY get together for an unforgettable night.PLUS they decide on being together.THE NEXT DAY, fucking Falin moves into Alexis appartment.AND SHE DOESNT FUCKING THROW HIM OUT.FUCK YOU, Alexis.
Tweet 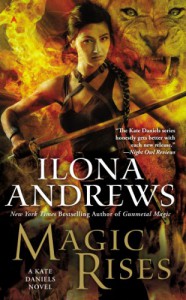 I don't know how to rate this book. While I love Kate, I am not sure I liked this book. At all.
Tweet 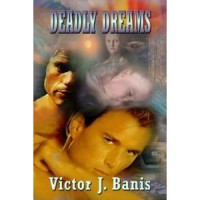 For once I am glad I have to wait a year for a book.Yes. This panda ain't very happy right now.
Tweet 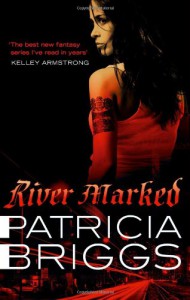 A decent book but not nearly as good as the first four. The plot was way too abstract, imho.
Tweet 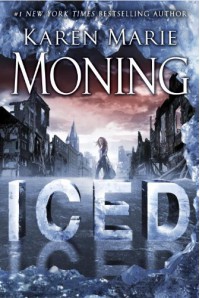 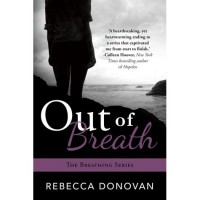 I came for redemption.I came for closure.But I was merely disappointed. This book did not do justice to its predecessors. It left me unsatisfied after everything I had to go through with Emma and Evan.
Tweet 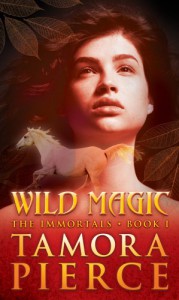 Ten years ago, I probably would have LOVED this book. Sadly, I think, and I thought I'd never say this, this book passed my perssonal expiration date a few years back.Don't get me wrong, I did like the book, and I'd recommend it to any pre-teen, but if I had to describe it all I could probably say would be 'It was cute'.The characters are likeable and the world building is believable... but well, there are a few BUTs.- While the writing is enjoyable, it isn't very descriptive. A lot of books spent waaay too many words on the smallest details - this book spents way too few.- The characters, especially Daine, had it in my opinion 'too easy'. Daine has too many talents for my liking and took way too little time learning her special skills. It didn't feel earned. Furthermore I fear what we know so far is merely the tip of the iceberg... #mary-sue :(- While I enjoyed the overall plot, I never really connected emotionally with the story. No matter what happened, I never really feared for our main characters. To me not knowing their fate is part of the fun... Knowing they'll never come to any fatal harm kinda takes the excitement out of it. Overall it's a decent read that I wish I had discovered earlier. Literally.
Tweet 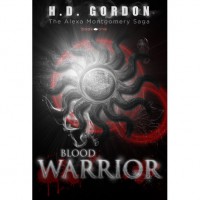 For me this was absolutely painful. I really wanted to like this, and even more so I really wanted to finish this book, but I literally had to force myself to pick it up again and to continue for more than one or two pages. (Note that I started this book three weeks ago. That is so unusual for me. I normally devour books in 1-2 days.)I didn't enjoy the plot. Everything was so predictable to me. More often than not I had those "yep, I called it" moments... Plus this was like... SO BORING. The characters were just as annoying. I almost threw up all over my tablet when the swooning over our heroine started. Authors, PLEASE, flaws are LIKEABLE. What frustrated me the most tho, was the writing. Not so much the typos, I normally can live through that, but it was SO DAMN SLOPPY. There's really no better way to say it. I simply could not enjoy anything because I hated the protagonists voice so much. Generally, I can get used to a heroine. But I simply wanted to shoot her. Or me. Really, I thought it was painful. HAVING SAID THAT, I don't want to insult the authors work. I know, my response was very negative but I honestly do believe it can be great for others. It simply wasn't my cup of tea.
Tweet
NEXT
581 BOOKS